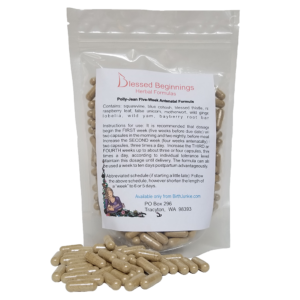 Who is Polly Block?

Polly Block was a widely known and highly respected midwife. Midwives from all over the United States frequently sought her counsel, because of her broad experience with special birthing techniques. She was invited by a scholar from a national foundation to assist in research on birthing customs in different cultures but home obligations prevented her from accepting that honor.

Her special interest was the effect of herbs on pregnancy, labor, and delivery of birthing mothers.

Polly was an active lecturer on the various techniques and procedures of home delivery. She lectured at a seminar for nurses and midwives at Idaho State University. And of course Polly observed medical doctors and naturopathic physicians in the delivery of hundreds of babies. A native of Texas, Polly made her home in American Fork, Utah in later life and focused efforts on writing. Sadly she passed away in November of 2007. 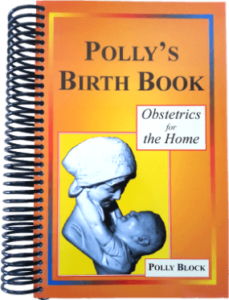 What Is Polly-Jean 5-Week Antenatal Formula?

Polly Block writes in her book Polly's Birth Book - Obstetrics for the Home: “We have found the Polly-Jean Formula–an herbal combination that gravidas begin taking five weeks prior to anticipated date of delivery–to be a boon to the home birth movement. It assists in the following ways:

What Is Contained in the Polly-Jean Formula?

This product is 400 capsules, which is a full 5+ week supply, depending on dose you choose to take. Similar products are sold in quantities of 100-150 capsules and do not inform you that one bottle is not enough for 5 weeks, so you would end up needing to order more, possibly getting them too late. Your purchase of Polly Jean 5-Week Antenatal Formula covers your entire prenatal need.

Increase the SECOND week (four weeks antenatally) to two capsules, three times a day. Increase the THIRD and FOURTH weeks up to about three or four capsules, three times a day, according to individual tolerance levels. Maintain this dosage until delivery. The formula can also be used a week to ten days postpartum advantageously.” In email contact I had with Polly before she passed away, she said I should include the following information here

“The Polly-Jean Five-Week Antenatal Formula tends to create a balance in the stepped-up hormones toward the end of pregnancy. Over the years women have reported that they have found no better ‘female corrective’ than the Polly-Jean formula, pregnant or not.”

What People Have Said About Polly’s Formula

“Dear Charity, Over three years ago, I found out that I was expecting my fourth child. My previous midwife had advised me not to have any more children due to extremely long labors accompanied by excessive blood loss/hemorrhaging. Through research and prayer, I found the Polly Jean 5-Week Antenatal Formula and ordered it. By that time, I knew I was expecting TWINS and the stakes were even higher, as multiple births have bleeding problems due to the overly stretched uterus. Because my presenting twin was breech, my midwife’s back up doctor insisted that I have a C-section. Every doctor that I consulted said the same thing. Finally, at the suggestion of the back-up doctor, I met with one of her professors at UF Shands teaching hospital in Jacksonville (they also have one in Gainesville). He was known as a breech expert. To make a long story short, I ended up delivering the twins in the operating room at Shands Hospital on a narrow metal gurney, feet in stirrups, bright lights and about 20 medical professionals looking on – it was the most amazing birth experience of my life. The twins were two days late when I went into labor naturally. We woke up the children, dropped them off at friends, and headed for the hospital. By the time I got there, I was already 10 cms!!!!! We had to WAIT for the doctor to arrive, so I cannot put a proper time on my labor. From the time my water broke to the time I was checked at the hospital was only a few hours. The whole process, from start to finish, was less than 5 hours!!! (Pretty amazing, considering my last labor was about three days, followed by the usual heavy blood loss.) The breech delivery went without a hitch. In fact it was EASY. My doctor was AMAZED at my lack of blood loss and asked me what I ate during pregnancy. (I had only been seeing him for a few weeks, so had not told him about my regime.) I told him about the Polly Jean Formula and he wanted to know everything in it. He said in all his years of teaching and practice, he had never seen such little blood loss in a twin pregnancy. Not to mention the fact that I was carrying 15 pounds of baby!!! In short, I cannot say enough about the Polly Jean Formula and recommend it to all my pregnant friends. I thank God that I found it and truly consider it an answer to prayer. I look forward to using it again, now that I am expecting Blessing #6, a precious boy, due February 9. Thanks are not enough to express my gratitude to you for making it available. Gratefully, Laura”

“Polly’s formula was a fantastic supplement for my home birth. I was amazed at how I gave birth so easily in less than three hours!” - Marie, with baby #5

“Wow! This was the fastest labor of my 6 births! I usually labor for at least 10+ hours, but this time I had him in under 4! I could really tell the frequent Braxton Hicks contractions were helping to get things ready. I will definitely be using your herb formula again if we have another baby.” Leslie

“I had an awesome labor and birth- hardly any bleeding at all, where, with my other births, I have lost too much blood. Even my recovery was very quick and easy.” - Sarah

“Recently I was introduced to your herb formula by a client. She told me she was using it, but I didn’t really put all that much stock into the claims (oh, I believe in the benefits of herbs and such and even used RRL tea for some of my own pregnancies, just some of the claims seemed a bit stretched). I have served as midwife for this client at 2 previous births and know her to labor long and hard with too much blood loss at the end. This labor was so different, though! She labored very efficiently and the baby was born in under 5 hours, start to finish. She had minimal blood loss and was up and about very quickly. I am just VERY impressed and can see that it really does live up to the claims. I will be recommending it to my clients from now on (can I get a referral fee for that – lol – just kidding!).” - Carrie

“I recently gave birth to our fifth baby. I have a history of long, slow labors. During past pregnancies, I’ve taken red raspberry leaf tea and evening primrose oil, and once an herbal formula similar to PJ’s, all with an aim to preparing my uterus and cervix for labor. The results were nonexistent to mild at best. I’d either have no Braxton-Hicks contractions at all (that I could feel), or mild ones that petered out a week or two before birth. My non-induced labors were long and dragged-out, with several days of prodromal labor before “the main event”. This time was different! I took the recommended final-month regimen of PJ’s and had 4.5 weeks of very strong Braxton-Hicks contractions. It really felt like they were “doing something” for a change. Labor was quick and efficient, and we had a wonderful, easy birth. PJ’s is an exceptional product, and if we are blessed with another baby, I definitely plan to order it again. Thanks, Charity, for making PJ’s available to your customers!” – Kathleen

Please keep in mind, as with all natural supplements, proof of their ability to do as they claim is based upon word of mouth use and not scientifically proven evidence. BirthJunkie.com and Blessed Beginnings makes no claims that this or any of our formulas are scientifically proven effective; we simply believe, based upon usage of these and other herbs over time, that the formula may help by nourishing your body’s regular functions and helping to improve your immune and body system responses. We understand that some herbs work differently on different individuals and therefore advise that you consult with a health care provider prior to taking any supplements to be assured of how they may affect you based upon your overall health and use of other medications.